Summit Fire and EMS is an amalgamation of several smaller fire departments that have been merged and consolidated over the years, including:

Summit County is rich with important Colorado history. The area was first inhabited by the Ute Indians prior to the arrival of fur trappers and miners in the 1800s. The mining towns of Frisco, Dillon and Montezuma all experienced the typical boom-and-bust cycle in the late 1800s and early 1900s. Like many towns across the west, Frisco and Montezuma suffered devastating structure fires as well as wildland fires. The area was geographically isolated and was served by wagon roads over high mountain passes and later by two railroads to serve the extensive mining operations in the area. As water and associated water rights became more important in the western portions of the United States, the Denver Water Board began acquiring water rights in the area, which eventually lead to the entire town of Dillon being re-located to make room for the Dillon Reservoir in 1963. As the mountain regions began to develop, a need for fire protection also developed.

In 1971, the Dillon Valley Metropolitan District specifically added fire protection to its duties and built the station on Deer Path Road. The metro district purchased the hydrants from Denver Water, but they opened backwards, which caused some fire-extinguishing issues. Daryl Potts was the first paid chief/water operator, followed by Jim Jordon, then Francis Winston, who later became the first Chief of the Lake Dillon Fire Protection District.

In 1973, the Frisco Fire Protection District was formed, and the first station was located at Third Avenue and Main Street, current site of the town information center. In 1975, a new station was built on South Third Avenue, where the Frisco Community Center stands. In 1980, a bond was passed, and a new station was built in 1981 at 301 South Eighth Avenue and is still in use today as Summit Fire Station No. 2. Prior to this, Frisco boasted a volunteer fire department but maintained few historical records. We do know that snowplow drivers and others were used as firefighters, and air-raid sirens and phone trees were used as notification methods. At one point, the drive train broke on the old fire engine -- but the pump still worked -- and a tow truck was used to pull it to a fire at Tiger Run, sirens wailing, at about 10 miles per hour. The first paid chief was Bruce Gafert in 1978. In 1974, the Silverthorne Fire Protection District was formed, and a station was built at 401 Blue River Parkway that still is in use today as Summit Fire Station No. 10, which serve as the authority's administrative offices. There are no records of any organized fire protection prior to then.

In 1981, the Snake River Fire Protection District was formed, and Dave Parmley was hired as the first and only chief. The department had 30 volunteer firefighters and officers, plus a paid staff of 14, including a chief, assistant chief, two captains, two lieutenants, two fire inspectors and a training officer, working out of three fire stations. The budget in 2004 was $1.5 million, and the department handled nearly 700 emergency calls annually.

In 1984, the Dillon Fire Protection District was formed as a volunteer fire department. The Dillon Town Hall housed the fire department until a new station at 225 Lake Dillon Drive was built in 1985 and, following renovations in 2002, it remains in use today as Summit Fire Station No. 8. At one time, Dillon Fire housed an engine at the Lake Dillon Theater Company across the street from Station 8. A 1942 Sterling engine was given to the Town of Dillon, and in those days, if it wouldn't roll start before reaching the bottom of Buffalo Drive, firefighters weren't going to be able to use it at the fire. 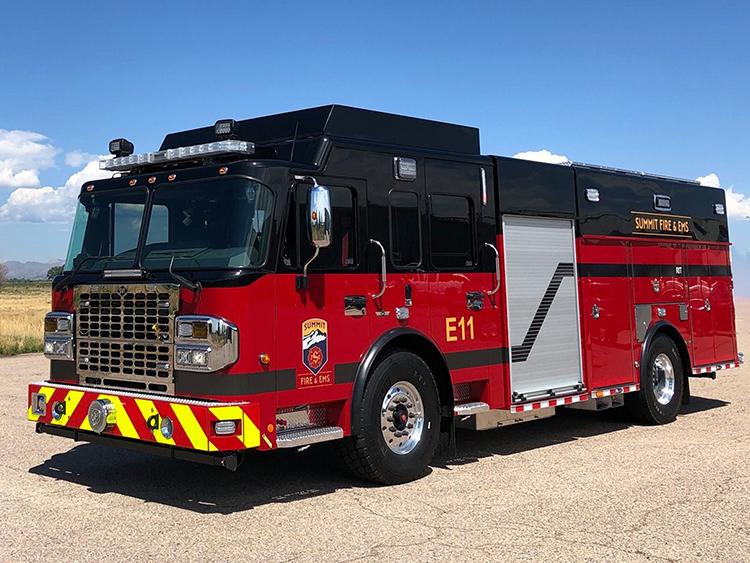